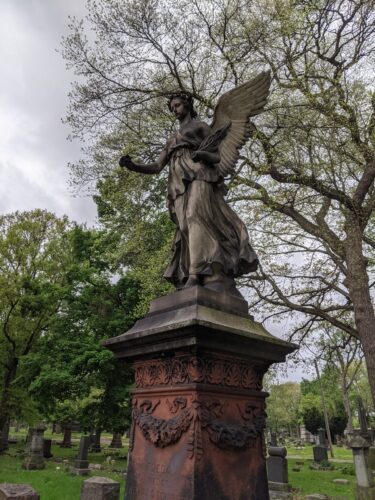 Woodland Cemetery was officially dedicated on June 14, 1853. The city bought the land because they had out grown Erie St. Cemetery. It purchased the sixty acres from Benjamin Butler, President Andrew Jackson’ Attorney General. The trees felled were sold to provide funds for future improvements. Woodland Cemetery remained a staple in Cleveland throughout the late 1800’s.

The original gatehouse was constructed in 1870. It was taken apart and removed in 1995/1996 with each of the stones being numbered and the deconstruction documented. In 2018, after money became available, the gatehouse was rebuilt with the original stone and cleaned. It was completed in October 2020.

Tours of Cleveland, LLC offers year round, exciting and educational walking tours of beautiful and historic downtown Cleveland. Explore Cleveland on foot, up close and personal. Learn more about our tours, see our schedule and book your tour at www.toursofcleveland.com