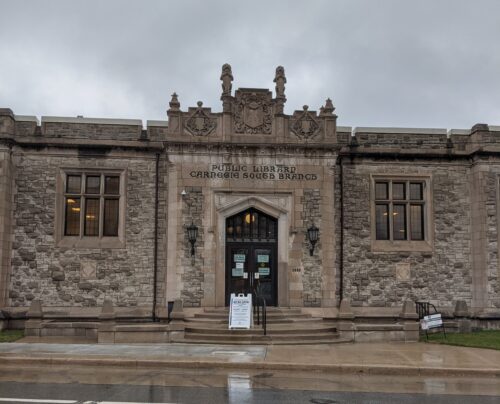 The Cleveland Public Library started back in 1869. It consisted on one main location in downtown. But the library wanted to expand throughout the city but it did not have the funds to build additional branches. In 1891, the Director of the Library, William Brett reached out Carnegie to ask for financial aid. Carnegie basically told Brett with all the wealth here in Cleveland, surely he could find someone in the city to help come up with the funds. But Brett and Carnegie did develop a friendship over the years and eventually Carnegie gave the Cleveland Public Library $250K (about 6.5 million today) to fund fifteen Carnegie Library branches.

Some of the branches have been converted into other businesses today and some still remain branches. This post looks at the Carnegie West (1990 Fulton St) and South (3096 Scranton Rd) branches.

The Carnegie West branch was opened in 1910 and has been renovated back in 1979. It is located on the grounds of Frank Novak Park in Ohio City. It is the city’s largest Carnegie Library branch. It was designed by Edward Tilton. The building utilizes brick, limestone and terracotta, which provides interesting contrasts on the exterior.

Inside the library there are plaster bas reliefs of Thorwaldsen’s Triumphal Entry of Alexander the Great into Babylon just upon entering. In other parts of the building are pieces of the Parthenon frieze. In the children’s reading section, there is a fireplace surrounded by eight tiles that illustrated various scenes from Alice in Wonderland.

The South branch opened in 1911. It was the eight branch built using Carnegie funds. The building’s stone façade, English Gothic architecture, and Tudor interior help make it a stand out in the Cleveland Public Library system. It did close back in 2013 because of issues with the building but was renovated and reopened in 2018. There is dark wood paneling throughout and a portrait of the benefactor, Andrew Carnegie himself.

Tours of Cleveland, LLC offers year round, exciting and educational walking tours of beautiful and historic downtown Cleveland. The Cleveland Public Library is a favorite spot of ours to highlight! Learn more, see our current tour schedule and book at www.toursofcleveland.com