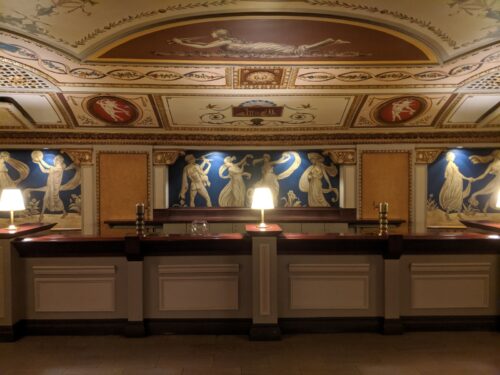 The Allen Theater turns 100 today, April 1, 2021 (No April Fools joke) . We have seen four of the five original theaters in Cleveland’s Playhouse Square celebrate 100 years in the past couple months!

The Allen originally opened as a movie theater and was part of the Canadian chain owned by brothers Jules and Jay Allen. They were unsuccessful in making it work in Cleveland and within a year sold the theater. The Allen Theater would change hands almost every decade throughout its early and mid 1900’s. It was owned by Loews, then RKO, then Warner Brothers and then Warner Stanley.

But unlike some its neighbors, it continued on. Throughout the 1970’s it was home to rock concerts – the Moody Blues, James Brown, Bruce Springsteen, the Eagles and the Doobie Brothers to name a few. In 1971, it even hosted the Budapest Symphony Orchestra, after all Cleveland had the largest Hungarian population outside Hungary. And in 1977, it became home to the short lived “Laserium”, a laser light show set to music shown on a domed ceiling that had been built in the theater.

It is bought by Playhouse Square in 1996, restored and reopened in 1998. It would host the Cleveland Symphony Orchestra throughout 1999 as Severance Hall was going through renovations. It would redesigned yet again and reopened in 2011 under the Power of Three. This decreased the size of the core theater, added additional theaters and became the home to not only Playhouse Square but Cleveland State University and the oldest regional theater company in the United States – Cleveland Playhouse.

The lobby of the Allen is so different from our other theater lobbies, with it’s beautiful rotunda with sixteen wooden columns, metal chandelier and painted dome ceiling.

Tours of Cleveland, LLC offers year round, guided walking tours of downtown Cleveland. Come explore our great city. Learn more about the tour options, see our schedule and book your tour at www.toursofcleveland.com.