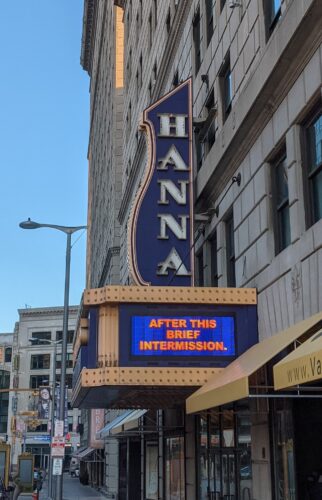 The Hanna Theater celebrates it 100 Year Anniversary today, March 28, 2021. It is the third Playhouse Square theater to turn 100 in the past two months.

The theater was built to honor Marcus A. Hanna, Clevelander, U.S. Senator and theater lover. Hanna had owned the Euclid Ave. Opera House which was demolished in 1922. The Hanna was designed by Charles Platt. It had a very small lobby, much like the New York theaters of the time.

The Hanna debuted with a live production of “The Price and the Pauper”. Its stage has been graced by the likes of Humphrey Bogart, Al Jolson, Harry Houdini, Katherine Hepburn, Sidney Poitier, Ginger Rogers, just to name a few. Milton Krantz would become the theater’s manager in 1941 and run the theater for 42 years! He earned the nickname “Mr. First Nighter” as we would walk the aisles on opening night shaking hands with the patrons. During his time at the theater we was present for 1,000 first nights!

In 1941, the Hanna presented Disney’s “Fantasia”. Cleveland was one of only twelve cities to premiere the movie. Technicians from Disney and RCA came several weeks prior to the debut to install special projection and sound equipment. During its nine week run, over 100,000 people saw the movie at the Hanna!

The theater was most know for its live theater performances. In 1971, they performed “Hair”. This caused quite the controversy and huge ticket sales. The show was deemed “vulgar and tasteless” but was said not to violate any indecency laws. A couple days after opening night three sticks of dynamite were found outside the theater. Several bomb threats followed and a bomb was hurled at Hanna theater but bounced off the marquee and then exploded, blowing out more than forty windows in the Hanna building! No one was inquired in the blast but in as separate incident there would be a fire at the hotel where the cast were staying that would kill four members of the show’s company.

The theater continued on, never closing like our other theaters but would remain dark for long periods of time. They also never faced the threat of the wrecking ball. In 1999, they were purchased by Playhouse Square. In 2008, the Great Lakes Theater Company would make the Hanna Theater there home and become a staple in Playhouse Square.

Tours of Cleveland, LLC offers walking tours of beautiful and historic downtown Cleveland all year long. Our Downtown Highlights tour covers Public Square to Playhouse Square and everything in between. Learn more about us, see our schedule and book your walking tour today at www.toursofcleveland.com.