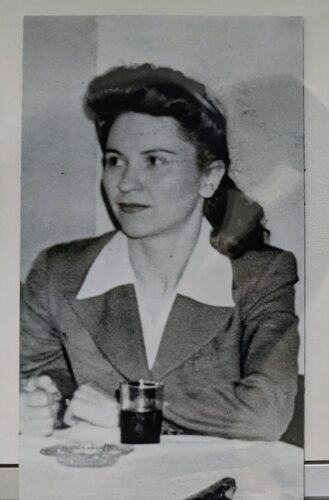 Joanne Siegel (born Jolan Kovacs) was born in Cleveland in 1917. She wanted to be a model and placed an ad in the paper looking for modeling work. Joe Shuster and his partner, Joel Siegel hired Joanne to model for sketches for a character in a comic book they were creating. That character would be Lois Lane in the Superman comics.

She would pose for them every Saturday until they had enough sketches to use. Joel Siegel, would pose as Superman when needed. Shuster and Siegel would use some of Joanne’s character traits in the development of Lois, in particular her ambition, intelligence and gutsy personality. Joanne moved from Cleveland to pursue her modeling career as well as work for a ship builder during WWII.

She ran into Joel at a charity function in New York City and they reconnected. Joel had said he let her get away before but not this time. They would be married in 1948. Shuster and Siegel had sold the rights to their creation, Superman, for just $130.00 years prior.

Joel and Joanne lived a modest life and had one child. But Joanne would lead the fight to get her husband and Shuster the money that they deserved for Superman. In the 1970’s DC Comics agreed to give Shuster and Siegel an annual stipend of $20,000. for the rest of their lives. Joanne was not satisfied and continue fighting.

Joel passed away in 1996. In 2008, Joanne won a lawsuit that gave her a share of the US copyright for Superman. She would pass in 2011 in California.

Many Faces of Lois Lane

Lois Lane was recused by Superman, was his girlfriend and later wife. Lois Lane was also a strong, independent woman with a career as a reporter and in some story lines even had super powers of her own. She has been portrayed by Noel Neill, Terri Hatcher, Margot Kidder and Amy Adams, to name a few, but the original Lois Lane was Joanne Siegel.