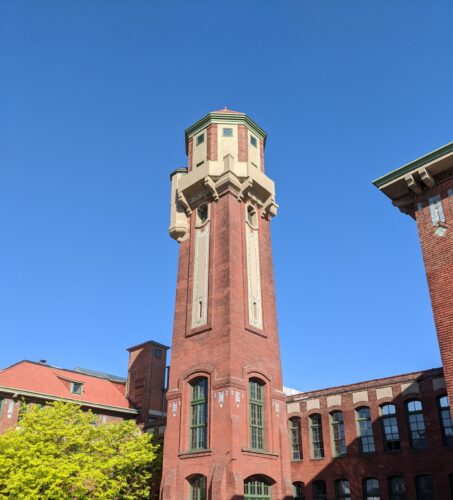 One building that I have always been fascinated with is the Tower Press Building. It is not on our walking tour as it is a little off our path, on Superior Ave. and E. 21st St. Its most striking feature is the five story tower rising up in the center of the complex.

The Tower Press Building was built in 1907 by Morris Black of the H. Black Company. They made women’s clothing and coats. It may be hard to believe but Cleveland in the early 1900’s was home to the second largest garment district in the country, only New York was bigger. (Hey, that sounds familiar, think Playhouse Square today).

Morris Black believed that a factory should be productive as well as a pleasant place to work. He had architect Robert Kohn install proper ventilation and ample light throughout the building. The tower was a water tower that was part the pressurized sprinkler fire suppression system in the building.

The Great Depression took its toll on the Garment Industry in Cleveland with it going under in the 1960’s and 1970’s. The H. Black Company would merge with the Printz-Biederman Co. in 1922. In 1928, the building become home to a publishing company and be renamed the Evangelical Building and then a few years later the Tower Press Building. After sitting vacant for more than two decades the building would be renovated in 2002 as apartments and artists studios. Even the five story water tower is a 1,750 sq.ft. apartment!

Tours of Cleveland, LLC offers exciting and educational walking tours of beautiful and historic downtown Cleveland. Our tours are offered year round! Visit our website to learn more, see our current schedule and book your walking tour. www.toursofcleveland.com.