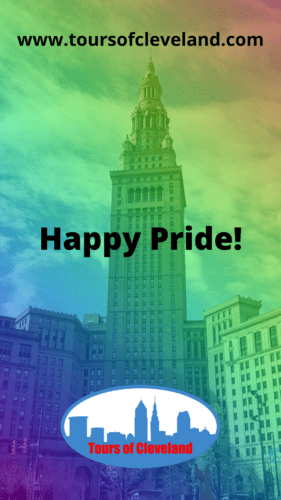 Today was suppose to be the day we in Cleveland celebrated Pride Month with the annual festival and parade downtown. It has been postponed until Saturday, September 12 due to COVID-19. But that doesn’t mean we can’t celebrate and honor the LGBT history here!

Cleveland and Akron hosted ninth Gay Games in 2014.  The Gay Games drew over 8,000 athletes from more than 60 countries to the area to compete in over 35 sporting and cultural events. Opening ceremonies for the games were held at the Q (Rocket Mortgage Field House today) and included a surprise video message from President Obama.

The Hingetown neighborhood in Ohio City is home to an Ohio Historical Marker honoring the neighborhood and the LGBT Civil Rights Movement. Located at W. 29th St and Detroit Ave, this was the center of gay culture in Cleveland for many years. The neighborhood was the home of many gay bars and nightclubs, the first Lesbian-Gay Community Center and the first Gay Pride Parade in Cleveland took place here as well in 1990.

Want to learn more about Cleveland’s LGBT history, check out Ken Schneck’s LGBTQ Cleveland book. We are are also a member of Plexus LGBT & Allied Chamber of Commerce here in Northeast Ohio. They are a great resource for the business community as a whole.