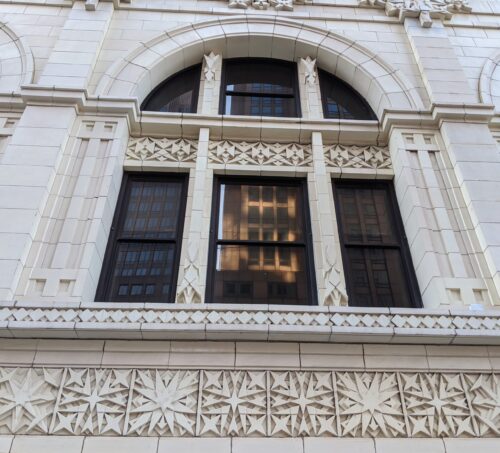 A building that has always fascinated me is the Standard Building, just off Public Square, mainly because of its looks – covered in creamy terra cotta with repeating starburst patterns throughout. It was built it 1925 and at that time was the second tallest in Cleveland. It was the Brotherhood of Locomotive Engineers (BLE) Cooperative National Bank Building then.

The BLE was considered to be the oldest union in the country at this time and one of the largest, with 80,000 members. Under the leadership of Warren Stone, they would build the Engineers Building in 1910 (where the Marriott stands today). It would be the first skyscraper built in the US by an union. The bank was the also the first bank for a union. They would later merge and become the Standard Trust Bank but would go under in the Great Depression. The building would then be renamed the Standard Building.

The Standard Building was used as an induction station for the the US Military from WWII to 1967. Elliot Ness had his offices in the building. It was home to the downtown campus of Western Reserve University. The 20th floor was a glass enclosed garden and promenade with a restaurant, ballroom and health club. Elliot Ness was know to play badminton there.

In 2014, the building was sold and like many of our great buildings downtown began its transformation from offices to apartment living.

Tours of Cleveland, LLC offers exciting and educational walking tours of beautiful and historic downtown Cleveland. Tours are offered year round. Learn more, see our scheduled and book your tour today at www.toursofcleveland.com.