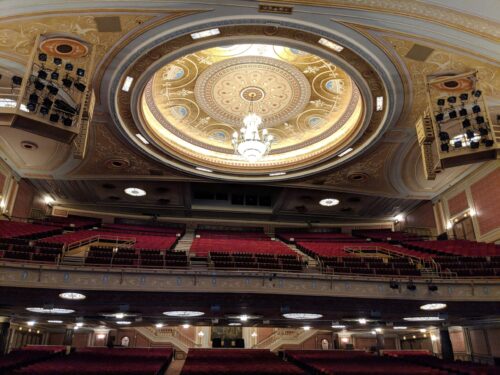 The State Theater opened on February 5, 1921 – 100 years ago today! It is the first of the Playhouse Square theaters to celebrate their 100 year anniversary. Set for demolition in 1972, we are so lucky to still have this amazing theater here in Cleveland.

Originally part of the Loew’s theater chain, it was the flagship theater for the company here in Cleveland. It showed movies and live performances. The likes of Bob Hope, Jack Benny, Judy Garland and Cab Calloway all graced the stage in the 1930’s.

The lobby is consider the world’s longest theater lobby and features four original murals by James Daugherty and one other by Arnold Engandler done in 1923. There is another mural behind Engandler’s; it is believed to be a fifth James Daugherty mural. To expose that work would damage both pieces so it continues to remain hidden.

The last picture to play at the State Theater was “Ice Station Zebra” starring Rock Hudson, Ernest Borgnine and Jim Brown (of the Cleveland Browns). The theater would close on February 2, 1969. It was renovated by Playhouse Square and reopened in June 1984. Part of the renovation work including increasing the size of the stage; they say you could take your average high school gymnasium with its bleachers and put on the stage today.

As of now, the theaters are set to reopen in the Fall. I am so looking forward to seeing a show at the State Theater again and taking our tours back inside the beautiful lobbies!

Tours of Cleveland, LLC provides year round exciting and educational walking tours of beautiful and historic downtown Cleveland. To learn more, check out our latest tour offerings, see the schedule and to book visit us at www.toursofcleveland.com.