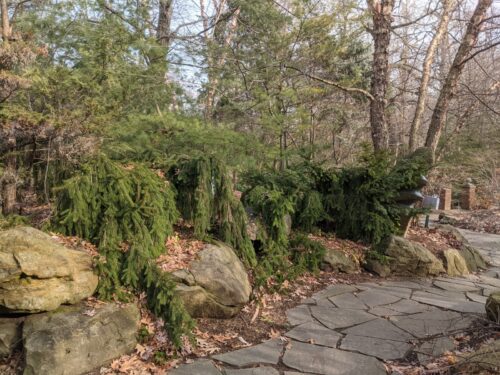 The other week on a rare “warm” January day I visited the Cleveland Botanical Garden. Now, I know it is the middle of winter and the stunning roses are not in bloom and the herb and vegetable gardens are pretty sparse but it was a change to get outside and still find some beauty amongst the grey Cleveland winter days.

Early days of the Garden

The Cleveland Botanical Garden actually traces is roots back to when Eleanor Squire donated her collection of 250 horticultural books to the Garden Club of Greater Cleveland in 1916. In 1930, six members of the Garden Club decided build a dedicated home for the collection. These six included some of Cleveland’s most famous names like Mather, White, Otis, and Sherwin. On December 4, 1930, The Cleveland Garden Center opened its doors to the public and became the first civic garden center in the country.

Their home was flooded in 1959 and a the Garden Center found a new home on the land that previously housed the Cleveland Zoo. It is interesting to learn that today’s herb garden was the site of the old monkey house and the Japanese Garden once was the bear pit. The Garden Center of Greater Cleveland opened at its new location on January 12, 1966. In 1994 they became known as the Cleveland Botanical Garden.

In 2003 they opened the Eleanor Armstrong Smith Glasshouse. The Glasshouse is 18,000-square-feet and it focuses on the flora and fauna of two distinct parts of the world — the warm, dry desert of Madagascar and the tropical rainforest of Costa Rica. You can travel the world without ever leaving Cleveland!

Finally, in 2014, they joined forces with The Holden Arboretum, creating the 13th largest public garden in the country. My visit this January taught me that yes there is more in bloom during the spring and summer but you can find beauty even in the dead of winter. Totally worth checking out! They are currently open Wednesdays – Sunday, 10:00 am – 5:00 pm and are offering discounted admission through February 7, 2021. Timed tickets are required and can be purchased on their website.

Tours of Cleveland, LLC offers exciting and educational walking tours of beautiful and historic downtown Cleveland, year round. Want to explore the city and its amazing history, come check us out. Learn more, see our schedule and book your tour at www.toursofcleveland.com.