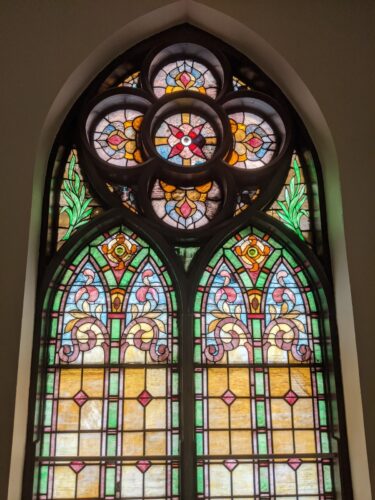 I took a tour the other week of the new San Sofia apartments in Tremont. You may think, okay. But the thing that really sets this apartment building apartment apart is the fact that it is built inside an old church and its adjoining school building.

Back in August 2018, I did a series of blog posts on churches in Cleveland and included some buildings that were no longer being used as churches, this included Zion United Church of Christ in Tremont. At that time they had announced plans for the conversion but had not started work.

Zion United Church of Christ traces its history back to 1867 when a group of German families started the church. The current structure was completed in 1885. Services were exclusively in German until 1916. The church has a 175 foot steeple, that is visible for miles. Even though the church sold the building for this project, a small congregation still remains and has worship space in the church school building.

The middle of the sanctuary is a hallway that serves as the entrance to the apartments in the sanctuary portion of the building. Pieces of stained glass that have been removed from the windows on the north and south sides of the building are incorporated into the design here. The original chandeliers have been cleaned and hang in this space as well.

In the apartments where the stained glass has been removed from part of the windows to allow natural light and the ability to open those windows, parts of the original stained glass still remain. Through out the apartments pieces of the supports that held up the mezzanine pop out!

The school house building contains the original windows that have been restored in the apartments and many exposed beams that support the roof as well as some of the original painted brick from the classrooms.

There are 25 unique floor plans and prices range from $1,000 to $2,490 for these one and two bedroom apartments. I want to thank Jeff for my tour. Feel free to check out the San Sofia site for more information on rentals.