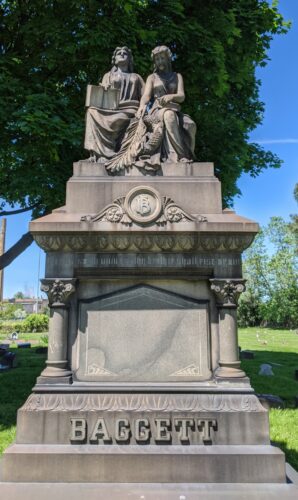 Riverside Cemetery was created for the residents on the west side of Cleveland in 1875. Prior to this there were only small cemeteries in the area and the residents wanted to establish a larger cemetery that could accommodate future generations. Titus N. Brainard would sell around 100 acres his land to establish Riverside. It was the perfect tranquil setting in the countryside. Of course today I-71 passes right beside it. The cemetery would officially be dedicated the following year in 1876.

During the dedication ceremony on November 11, 1876, Ohio’s Governor Rutherford B. Hayes, who had just been elected President of the United States the week prior, arrived and toured the cemetery. On this day, trees were planted along Centennial Ave. This 1,000 foot, straight road that extends from the chapel to circular area at the end was said to be one of the longest straight roads in any cemetery in the US.

Many famous Clevelanders and not so famous Clevelanders are buried here. I took a trip to Riverside Cemetery back in June to explore. I was looking for the grave of Linda Eastman, of the Cleveland Public Library. We talk about her on our walking tours so I was really interested in finding her grave. Unfortunately, I did not find it but but I did come across many beautiful markers.

One that I found particularity interesting in for the Daykin family, with its large lion on top. John N. Daykin worked for the railroad. He had the honor of being the conductor of the funeral train that would take President Abraham Lincoln from Washington, DC to his burial site in Springfield, IL and of course stop here in Cleveland.

Other residents of the cemetery include John Newton Richardson, an architect who would design the Franklin Circle Christian Church. Robert Rhodes, whose home at 2905 Franklin Boulevard is one of the finest local examples of the Italianate Villa style of architecture. Beer brewer, Carl E. Gerhing who would produce one the first lagers in Cleveland.

If you like to walk through out cemeteries, this is a good one! The grounds are mostly flat and make for an easy walk and those trees that were planted back at its opening provide wonderful shade.

Tours of Cleveland, LLC offers exciting and educational walking tours of beautiful and historic downtown Cleveland. Our tours are year round! Come explore the city from Public Square to Playhouse Square and everything in between. See our schedule and book at www.toursofcleveland.com.