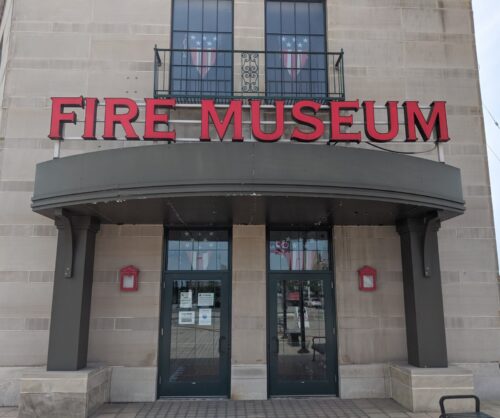 Continuing on the Fire Fighter theme from this week, today we take a look at the Western Reserve Fire Museum. I have been wanting to check this museum out for a while and finally this week I did. Wow, it was awesome!

The Fire Museum is located in the old fire station number 28 which opened in this location in 1926. The second floor housed the Fire Department Dispatch Center. This is where calls from 1,300 alarm boxes around the city would come through and fire fighters would be dispatched. This would remain in operation until 1999 when it was rolled into the city’s 911 system.

The museum would open in 2017. The first floor contains the exhibits which change on an annual basis and focus on local fire departments from Northeast Ohio. Currently the exhibit explores the Westlake and Solon Fire Departments as well as Collinwood (now part of Cleveland), specifically looking at the Collinwood Elementary School fire from 1908. There is an education center on the first floor as well, that helps teach kids about fire safety. The second floor is under construction but still contains the complete Game Well call center equipment.

One thing I found really interesting was about the fire bucket brigade. Fire buckets were the primary way of extinguishing fires before the fire department came about. Every home had their own fire bucket as required by law in Cleveland in 1815.

If there was a fire, the man of the house would grab the bucket and rush to the scene. The men would form the line from the water source to the fire. The women and children would ferry the empty buckets back to water source and it would continue on the fire was put out. Once the fire was over, the people would sort through the pile of buckets to find the one that belonged to their family and return it home.

The museum is currently open Wednesdays through Saturdays from 10:00 am to 3:30 pm. It is just $8.00 to visit. The staff and docents there are amazing and so knowledgeable. The space is available for events. The museum is located across from Progressive Field at 310 Carnegie Ave.

We here at Tours of Cleveland, LLC offer guided walking tours of downtown Cleveland. Public Square to Playhouse Square and everything in between. Our tours are offered year round. Learn more, see our schedule and book your tour at www.toursofcleveland.com