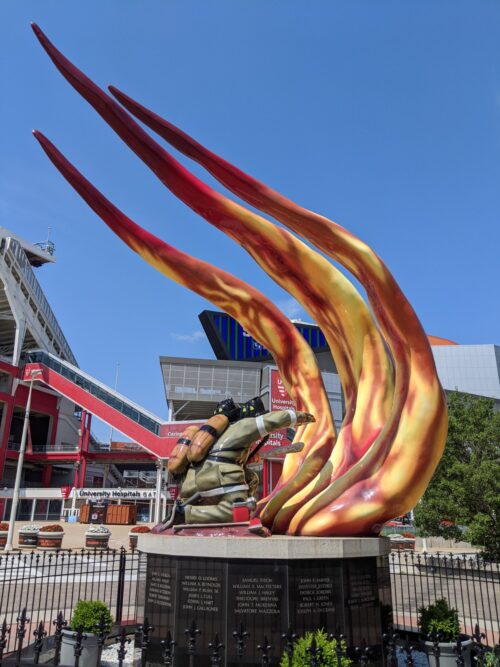 When I was at the Rock Hall the other week, I walked over to the Cleveland Fire Fighters Memorial. I had seen it from afar but never visited the actual site. The memorial honors the 77 Cleveland fire fighters who have lost their lives in the line of duty since the department was formed back in 1863.

The first monument by William Ward was dedicated in 1965 in Willard Park, near the Free Stamp. But in the early 1990’s, Fire Chief Walter Zimmerer realized most Clevelanders were unaware of that memorial and decided to commission a more prominent one. The original monument still remains in Willard Park though.

This Cleveland Fire Fighters Memorial is in between the Great Lakes Science Center and First Energy Stadium (home of the Cleveland Browns). The memorial was first commissioned in 1993. Artist Luis Jimenez, from New Mexico was chosen to sculpt the piece. There were many delays in the completion of the statue throughout the years that would cause it to exceed its budget.

Mr. Jimenez actually died in 2006 when becoming pinned underneath another piece of his art that fell on him. The memorial ended up being completed by local artist, Ron Dewey. It would be officially dedicated on June 15, 2007. Next time you are visiting the Science Center or the Rock Hall, take a few minutes to check it out and honor those fire fighters that gave their lives in the line of duty.

Learn more about the fallen fire fighters or donate to the memorial by visiting www.clevelandfirememorial.com

Want to explore Cleveland and learn about this city’s amazing history. Join us on a guided walking tour of downtown. Our tours are year round. Learn more, see our schedule and book at www.toursofcleveland.com