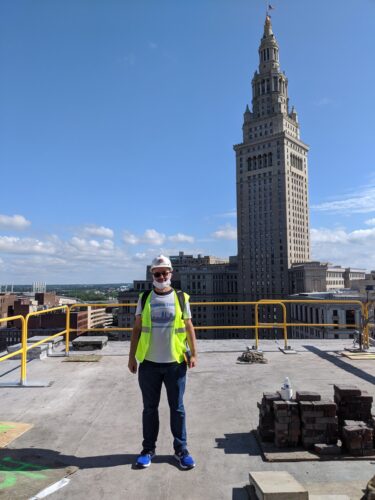 In July of this year, Cleveland Construction began their work on 75 Public Square, converting it from an office building into an 114 unit apartment building. Our walking tours begin near the building, so I have been watching their progress from the outside but being the ever curious fan of Cleveland history, I wanted to see inside the building. I was fortunate enough to get a behind the scenes tour of the work that Cleveland Construction is doing inside.

75 Public Square opened in 1915 as the home to the Cleveland Electric Illuminating Company. The building was designed by Hubbell & Benes, who would do the West Side Market and the Wade Memorial Chapel at Lake View Cemetery (to name a few). The building is 15 stories. In 1958, the Illuminating Company would move next door into the newly constructed 55 Public Square. After that the building would be home to many different offices, retail and restaurant establishments.

Some of the work the Cleveland Construction has done includes removing the old HVAC units off of the roof as well as the supports that held up the large Union Commerce Bank sign that used to sit atop the building. I have to say the view from the roof is pretty impressive! They are also working to repair the brick and terra cotta on the outside of the building and will replace the windows with new, more energy efficient windows.

Some work has exposed a few hidden gems. For example, the lobby on the ground floor is covered in wood paneling but upon removing that paneling beautiful white marble lined walls were revealed. I asked if had they found any secret papers or hidden “treasures” inside a wall that they were removing but so far nothing.

According to the Cleveland Historical website, there was a tunnel that connected both 75 and 55 Public Square underground. It was used by The Illuminating Company to facilitate their office move. At this point the crew in the building have not found evidence of the tunnel, but they admit they were not looking for it either. A mystery!?!?

The apartment building will include many amenities such as a fitness center, pet wash, game room and a rooftop patio. There will be space for a restaurant and other retail on the ground floor. My goal is to follow the renovations of the building throughout construction and give you updates. I want to thank Cleveland Construction for their assistance in this endeavor.

Tours of Cleveland, LLC offers guided walking tours of beautiful and historic downtown Cleveland. Our tours are offered year round. You can see our schedule and book your tour at www.toursofcleveland.com.