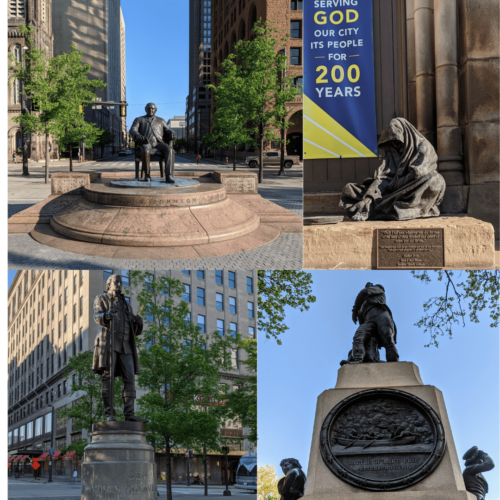 We begin a look at some of the Public Square statues, past and present. We will start with the obvious choice, Moses Cleaveland, the founder of the city. Moses of course arrived here on July 22, 1796. Instead of talking about him, I’d like to focus on the statue itself.

The statue was dedicated in 1888; so it is in fact older than the Soldiers and Sailor’s Monument. It is a bronze and marble statue sculpted by James G. C. Hamilton. He stands almost eight feet tall but the original model presented to the City Council of that time for review was much taller. It was requested the size be reduced before installation.

The statue was dedicated exactly 92 years after Moses’ arrival. It originally was placed in what would have been the southwest quadrant of Public Square but was moved with the redesign of the Square in 2016. Today, he stands in the middle of the southern side of Public Square welcoming all to our great city.

Now, one might say the Commodore’s statue is not on Public Square so why is it included here. Well, it used to be in Public Square along with quite a few other places. Today the statue is located in Fort Huntington Park beside the Cuyahoga County Courthouse. Commodore Perry is known as the “Hero of Lake Erie” and was instrumental in winning the War of 1812 for the United States.

The statue was dedicated in 1860 in Public Square and sculpted by William Walcutt, a Columbus born painter and sculptor. The original statue in Cleveland was marble but it was replaced in 1928 with the current bronze version. The marble version is now in Put-In-Bay, Ohio at the Perry Victory and International Peace Memorial.

The statue left Public Square back in 1892 to make way for the Soldier’s and Sailor’s Monument. It has been displayed in Wade Park, Gordon Park and was even in storage before making its way to Fort Huntington Park in 1991.

The bronze statue was sculpted by Herman Matzen. He also did the statue o Pope Gregory IX and Moses both on the Cuyahoga County Courthouse as well as the Collinwood School Fire Memorial. Matzen was Danish an emigrated to the United States. He taught at the Cleveland Institute of Art where Max Kalish (Abraham Lincoln statue on the Cleveland Mall) was one of his students.

Mayor Johnson is considered one of the top mayors in the country. He was a very progressive mayor. In his statue he is seated with a copy of Henry George’s “Progress and Poverty” in his hand. Our meeting point for our walking tours is this statue!

When I was Hungry & Thirsty

My favorite of the Public Square statues is often mistaken for a person. It sits on the steps of the Old Stone Church on the north side of Public Square. The man, is Christ. He sits with his hand outstretched asking for food. The statue is created by Timothy Schmalz and is inspired by Matthew 25:40 from the Bible.

“Truly I tell you, whatever you did for one of the least of these brothers and sisters of mine, you did for me.” The statue is a visual representation of charity. Timothy’s work is very powerful and Cleveland will be getting another of his works on a temporary basis in late June!

Come explore downtown Cleveland with us, Tours of Cleveland, LLC. We offer walking tours of beautiful and historic Cleveland year round. Learn more, see our schedule and book your tour at www.toursofcleveland.com.