The Guardians of Traffic - Tours of Cleveland, LLC
Skip to content 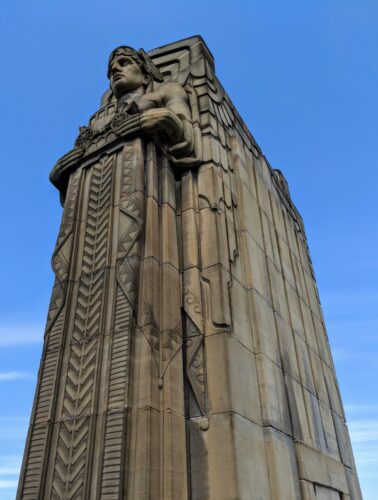 Have you taken the time to walk across the Hope Memorial (or Lorain-Carnegie) Bridge and get better view of the Guardians of Traffic? Last month, I was looking for a different spot to get my daily walk in, so I met a friend and we walked the bridge. The bridge is about a mile in length, was opened in 1932 and connects downtown with Ohio City. It was meant to have a lower level but that was never completed.

It is hard to believe but in the 1970’s, there was an effort to remove the Guardians of Traffic! They were called “monstrosities and should be torn down and forgotten”. Thank goodness, that did not happen! It 1976 they were added to the list of National Register of Historic Places.

The four pairs of statues stand on pylons at each end of the bridge. They are made of local sandstone from Berea. They were designed by sculptor Henry Hering and architect Frank Walker and symbolize the made progress in transportation through out the years. Henry Hering of course is the same artist who sculpted Security and Integrity in front of the Cleveland Federal Reserve and Energy in Repose also outside the Cleveland Fed.

Walking the bridge is a nice easy walk with great views of downtown and Ohio City. You can park in the lot behind the West Side Market (free for first hour and a half) and walk the span on a nice day. The path is wide which allows for social distancing.

Want to go for walk downtown? Check out our walking tours of downtown Cleveland. Explore the city, its past and beautiful architecture. Learn more, see our schedule and book your walking tour at www.toursofcleveland.com.