Presidents in Art around Cleveland - Lincoln - Tours of Cleveland, LLC
Skip to content 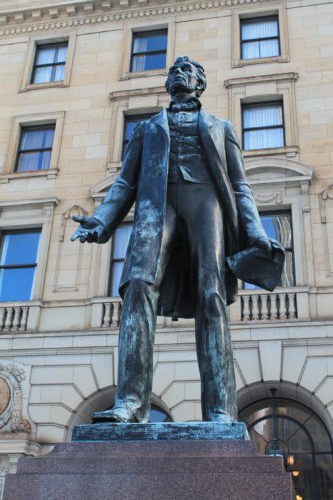 Max Kalish’s statue of Abraham Lincoln stands proudly in downtown Cleveland. Abraham Lincoln would serve as our sixteenth President from 1861 until he was assassinated in 1865. Lincoln is known for his two visits to Cleveland, one in life and the other in death.

On his way to his inauguration, he stopped in Cleveland, gave a small speech and spent the night at what was the Weddell House. Today, the Rockefeller building sits at the site of the old hotel. Check out the plaque on the side of the building, indicating that Lincoln spent the night there.

Upon his death, his funeral train made a stop here in Cleveland with his casket on display in Public Square. Kalish’s statue was unveiled in 1932 on the mall in front of what was then the Board of Education Building.

Lincoln is featured on the inside of the Soldiers’ and Sailors’ Monument as well.

See the statue up close and learn more about Abraham Lincoln’s time in Cleveland on our Downtown Highlights Walking Tour. To book your tour, click here.