Presidents in Art around Cleveland - Jefferson - Tours of Cleveland, LLC
Skip to content 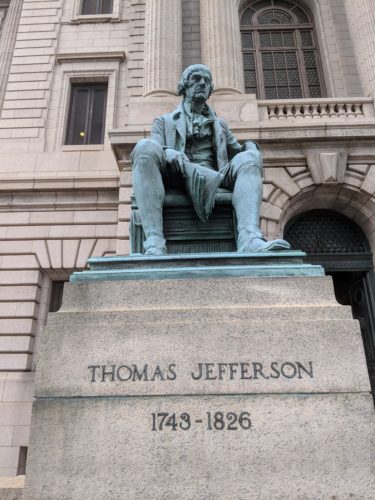 On the steps of the Cuyahoga County Courthouse in downtown Cleveland sit two statues – one of Thomas Jefferson and the other of Alexander Hamilton. Thomas Jefferson of course was the third President and author of the Declaration of Independence. Hamilton was the first Secretary of the Treasury under Washington. The two had very different ideas of how our new nation would be governed with Jefferson advocating for a smaller government and Hamilton the opposite.

Today both are memorialized across from each other on the steps of the County Courthouse. These bronze statues were done by Karl Bitter in 1911. Karl’s work is featured in New City’s Trinity Church, North Carolina’s Biltmore Estate and on the Cleveland Trust Company Building here in Cleveland!