Presidents in Art around Cleveland - Garfield - Tours of Cleveland, LLC
Skip to content 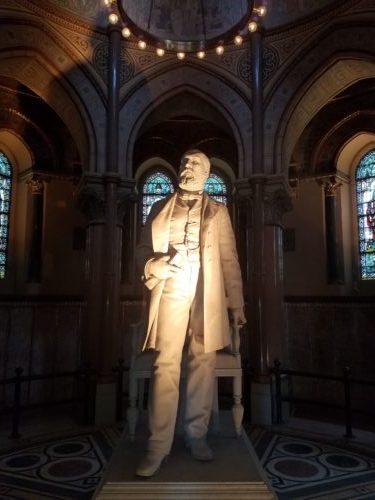 James A. Garfield was the 20th President of the Untied States. He was born in Cuyahoga County, Ohio in 1831. He represented Ohio in the House for nine terms. In 1880, he became the Republican nominee for President and won that November. His term as President was only four months long, when on July 2, 1881 he was shot twice in a railway station on his way to New England. He would live for another 80 days before he passed on September 2, 1881.

On Memorial Day, 1890, the James A. Garfield Memorial was officially dedicated in Cleveland, on the grounds of Lake View Cemetery. The monument was funded solely by private donations. It is open to the public April through November each year. President Garfield and his wife Lucretia Garfield lie in a crypt beneath the memorial. There is a twelve foot marble statue of him in the rotunda. Check out the observation deck for amazing views of Lake Erie and downtown. This is a must see in Cleveland!