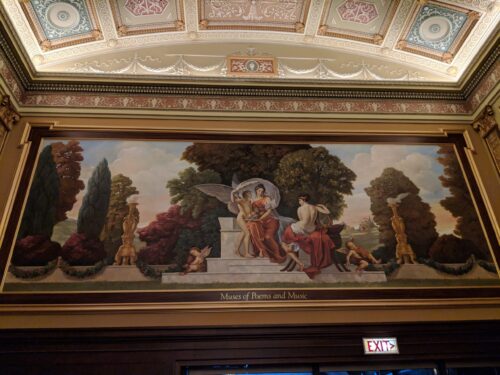 February 14, 1921 the Ohio Theater opened in Cleveland. Today we celebrate its 100 year anniversary! The Mimi Ohio Theater is part of Playhouse Square.

The theater was part of the Loews’ theater chain when it opened and it showed movies as well as live performances. In 1929, the theater showed Bela Lugosi in “Dracula”. Loews offered a faint check (a coupon for a free movie) to those patrons who fainted because they were so overcome by the horror of the film!

Life as a Casino

Loews would drop the theater in 1934 and the space would be reinvented as the Mayfair Casino in 1935 (although gambling was illegal in the city at that time). In the back of the balcony, they would build a bar known as the “sky bar” as it was the highest point in the facility. The casino was raided several times by Elliot Ness but he never found any illegal activity. It did not last very long; the casino owners went bankrupt by 1937.

Back to the Show

Lowes will pick the theater back up in 1943. It would play such pictures as “The Ten Commandments”, “Cleopatra” and for an amazing 91 weeks – the “Sound of Music”. But it would close on February 2, 1969, the same day as the State theater. The last picture the Ohio showed was “Star” another Julie Andrews film.

Ultimately it would be the first theater to be restored by Playhouse Square in 1982 although its lobby would not fully be restored until 2016. The ceiling in the lobby was recreated to look like it did in 1921 when it opened, as a fire in July 1964 gutted almost all of the lobby’s original interior. Today the Mimi Ohio theater is one of 11 theaters that make up Playhouse Square, the second largest theater district in the United States!

Tours of Cleveland, LLC offers exciting and educational walking tours of beautiful and historic downtown Cleveland. Playhouse Square is staple on most of our walking tours. Learn more, see our current schedule and book your tour at www.toursofcleveland.com.