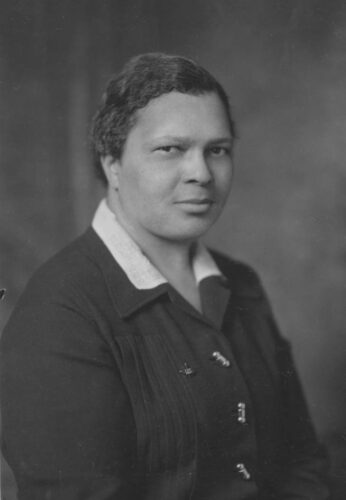 Jane Edna (Harris) Hunter was born in South Carolina in 1882, the daughter of sharecroppers. She trained to become a nurse and eventually moved to Cleveland where she attended the Marshall Law School and passed the Ohio Bar exam.

In 1911, she organized the Working Girls Association, which later would become known as the Phillis Wheatley Association. The Association worked with young African American women who were unmarried. It provided safe living quarters for them and helped many newcomers to the north avoid scammers who preyed upon them.

A nine story building was built on Cedar Rd in Cleveland serving as a safe place for young African American women. Eventually a scholarship fund was set up to help with their education. Jane Edna Hunter served the organization until 1948.

The mission of the Phillis Wheatley Association has grown over time, not just serving young African American women but the African American community as a whole. They offer cultural programs, child care assistance and neighborhood outreach.

In 1940 she wrote an autobiography titled “A Nickel and a Prayer“. It describes her “spiritual quest” from a life of poverty in the South to that of a career in the North helping young women. Hunter died in 1971 and is buried at Lake View Cemetery.

A natural question here is “Who is Phillis Wheatley”? She was a woman brought to the United States, Boston to be exact, as a slave in 1761. She learned to read and write and eventually became known as the first African American poet to be published in the U.S.