George A. Myers - Tours of Cleveland, LLC
Skip to content 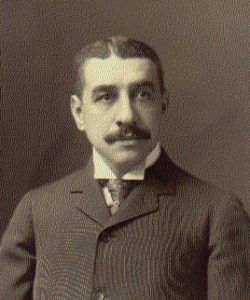 George A. Myers is often referred to as Cleveland’s best barber. But his influence extended beyond the chair and the shop. Myers was born in Baltimore, Maryland in 1859. He graduated high school but was denied entrance into the city college because of his race. He would learn to become a barber and move to Cleveland in 1879.

He got job at the barbershop in the Wedell House (Rockefeller Building today), a premier hotel in Cleveland where Abraham Lincoln had stayed in 1861. He got to know many of Cleveland’s elite business men here. These men would front him the money to open a shop in the new Hollenden Hotel (Fifth Third Building today) that would open downtown in 1885.

The Hollenden Hotel was an extremely glamourous place that attracted industrialists, celebrities and politicians. George Myers had the who’s who of Cleveland and the country in his chair. Eight U.S. Presidents sat for him as well as Mark Twain. Myers was very involved in politics and the Republican Party. One of his clients was Mark Hanna who helped craft McKinley’s campaign. Myers was named a delegate to the 1891 state Republican convention, that nominated McKinley to be Ohio’s governor. He would also work on McKinley’s presidential campaigns as well.

George Myers got out of politics after McKinley’s and Hanna’s death and devoted his time to his shop. He had installed telephone service for each of his chairs. Later, he learned the the management staff at the Hollenden planned on replacing all the black barbers with white barbers once Myers retired. He continued to work at the shop as long as he could despite several health problems.

On January 17, 1930 he told the staff he had something to discuss with them after lunch. He was no longer physically able to work and was going to have to let them know they were going to be laid off. It is believed the stress of that conversation was too much for him and he collapsed and died of heart failure during his lunch break.