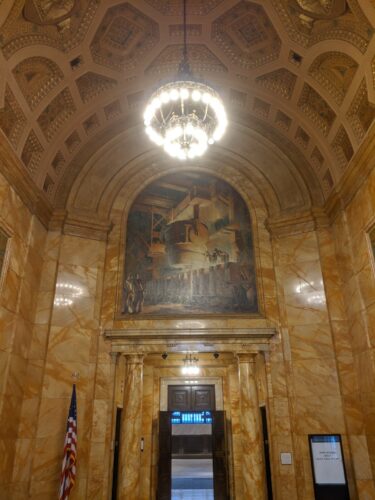 Cora Holden was born in Alexandria, Virginia in 1895 but moved to Cleveland to attend the Cleveland School of Art (now Cleveland Institute of Art) where she earned her graduate degree in 1918. She would also teach at the school throughout her life.

Locally she worked with architects Walker and Weeks. They would hire her to paint murals in several of the buildings they designed in Cleveland, most notably the Federal Reserve Bank of Cleveland (1923) , the Allen Memorial Medical Library on the campus of Case Western University (1926) and the Board of Education Building (1931). All of her murals, which are oils on canvas, are still visible in these buildings today.

“Steel Production” hangs in the center of the lobby of the Federal Reserve Bank of Cleveland, (one of the stops on our Cleveland From the Inside walking tour). “Asklepios, Greek God of Medicine,” which consists of four panels, hang in the Medical Library. (I have not visited this location personally). And finally “Progress in Education” and “Branches in Education” are visible in the lobby of the old Broad of Education Building, which is the Drury Plaza hotel today.

Cora Holden died in 1938 in Cleveland but is buried with her father in Alexandria, VA.

Tours of Cleveland, LLC offers exciting and educational walking tours of beautiful and historic downtown Cleveland. Our Cleveland From the Inside walking tours visits the interiors of some of Cleveland’s greatest buildings including the Old Stone Church, the Cleveland Public Library, the Cleveland Trust Company Building and Playhouse Square including access to one of the the theaters. This tour is offered every Monday, year round, except Federal Holidays. Book at www.toursofcleveland.com.