The Allen Theater - Tours of Cleveland, LLC
Skip to content 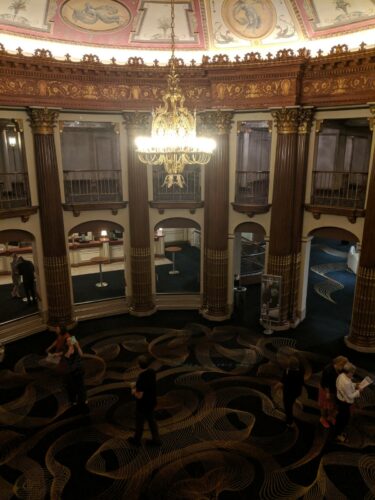 The Allen theater is one of the 11 theaters that make up Playhouse Square and one of the five original theaters. The theater opened in 1921 as a movie palace. It showed it’s last picture, Bonnie & Clyde, in 1968.

In 1971, it hosted the Budapest Symphony Orchestra. At the time Cleveland had one of the largest Hungarian populations outside of Hungary. In the early 1970’s it also hosted rock concerts with the likes of Bruce Springsteen, James Brown, the Eagles and Eric Clapton to name a few. And in the late 1970’s it was even home to the Laserium, a laser light show.

It was saved from being demolished in the 1990’s and has been since been renovated into several smaller theaters. It is home to Cleveland Playhouse, Cleveland State University and Playhouse Square productions. The Allen theater’s lobby still reflects the grandeur of its beginnings though. Its beautiful rotunda, with 16 wooden Corinthian columns and a 45 foot wide dome is a must see!