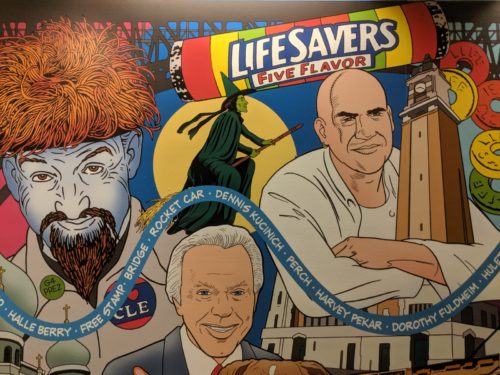 “Love Letter to Cleveland” is a 58 foot mural drawn by Gary Dumm and colored by his wife, Laura Dumm. The mural had originally been installed the side of the Orange Blossom Press building in Ohio City, near the West Side Market back in 2013. But several years of Cleveland’s winters got to it and a decision was made to move it.

This July is was officially relocated to the third floor of the Michael Schwartz Library on the campus of Cleveland State University just outside their Special Collections Department. The “Love Letter to Cleveland” mural tells the story of the history and national influence of the city of Cleveland. It includes famous landmarks, things that were invented here and people from Cleveland.

Who and what can you find in the mural? Here are a few things I’ll point out…

Tours of Cleveland, LLC offers walking tours of downtown Cleveland. See our schedule and book your tour at www.toursofcleveland.com.