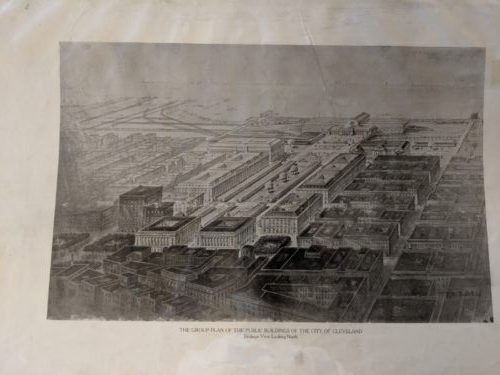 On our Downtown Highlights walking tour of Cleveland we visit the mall (the green space not a shopping mall) and talk about the buildings that surround it, like the Cleveland Public Library and the old Board of Education building. We also talk about the Group Plan of 1903, which basically created most of what we see today. While I was at the Cleveland Public Library in their Special Collections department the other day, I noticed the Group Plan of 1903 out on display. And I mean the actual plan document!

I had never seen the actual document before and being a history buff was pretty excited. I sat down and read it and looked at the drawings that were included with it. The plan was submitted to Mayor Tom Johnson by architects Daniel Burnham, John Carrere and Arnold Brunner in 1903.

The plan created a green space surrounded by public buildings. The four most important buildings according to the plan, were the Post Office, the County Courthouse, City Hall and the Library. It called for the buildings to be built in similar historic motives of classic Roman architecture and that they be a uniform scale in mass and height. The plan stated the buildings should be an “example of simplicity and uniformity, not necessarily producing monotony, but on the contrary, resulting in beautiful designs entirely harmonious with each other”.

You never know what you will find in the Cleveland Public Library! The Library is one of our stops on our Cleveland From the Inside walking tour! Learn more, see our schedule and book your tour at www.toursofcleveland.com.