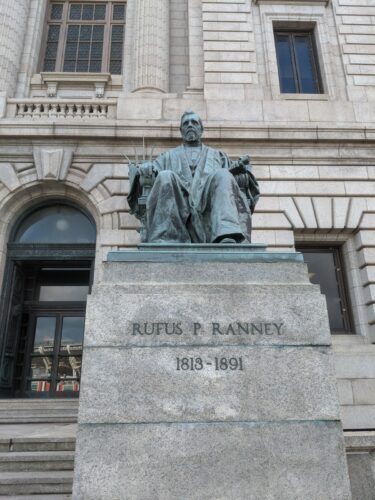 I have written about the statues of Thomas Jefferson and Alexander Hamilton that sit in front of the Cuyahoga County Courthouse but do you know the who the other two statues that sit on the backside of the Courthouse are? They are John Marshall and Rufus Ranney.

John Marshall served as the Chief Justice of the United States Supreme Court from 1801 to the time of his death in 1835. He delivered more than 1,000 decisions and penned more than 500 opinions during that time. He played a pivotal role in determining the Supreme Court’s role as the ultimate authority in interpreting the U.S. Constitution. Marshall was from Virginia and is buried there.

Rufus Ranney moved to Portage County, Ohio at an early age. In 1834, he began to study law, passing the bar exam in 1836. Ranney was involved in Ohio politics, representing Trumbull County in the Ohio Constitutional Convention of 1850-1851. He served on the Ohio Supreme Court from 1851 – 1856 when he retired but would serve again from 1863 to 1865. He moved to Cleveland and practiced law. He was unanimously elected the first president of the Ohio State Bar Association. He died in Cleveland in 1891 and is buried at Lake View Cemetery. Rufus Ranney was one of the most respected attorneys in Ohio.

Both statues are done by Herbert Adams. Some of his other works can be found in New York City, Boston and Washington, DC.

Tours of Cleveland offers exciting and educational walking tours of beautiful and historic downtown Cleveland. See our schedule and book at www.toursofcleveland.com.