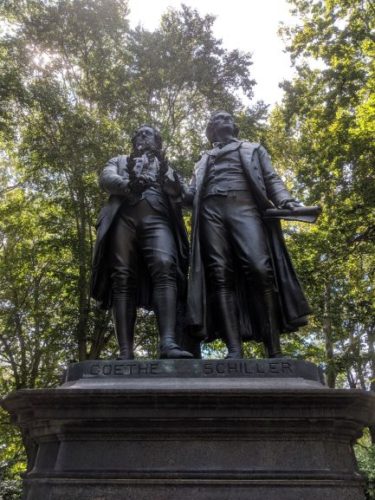 Also located in the German garden you will find the busts of Father Friedrich Jahn, the founder of physical education. He also designed gymnastic apparatuses such as the horse, rings, parallel bars and the balance beam. Johann Sebastian Bach, the famous German composer and Heinrich Heine, the German poet are also represented there.

Germans first arrived in significant numbers in Cleveland in the 1830’s at the time of the opening of the Ohio & Erie Canal. The Germans in Cleveland made significant contributions in many fields such as manufacturing, agriculture, architecture, music and the beer brewing industry. In higher education, the German Wallace College was a predecessor to what is today Baldwin-Wallace College and the Germans founded Notre Dame College and John Carroll University.

Tours of Cleveland offers walking tours of downtown Cleveland. Our walking tours are offered year round! Join us on our Downtown Highlights or Cleveland From the Inside walking tour by visiting www.toursofcleveland.com to see our schedule and book your tour.