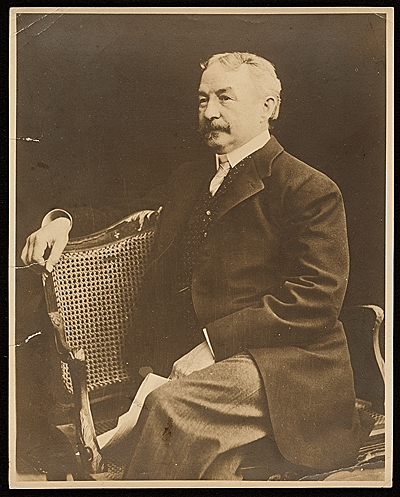 October is LGBT History Month – Most Clevelanders know Francis Millet (1846 – 1912) for his work in the old Cleveland Trust Bank Building (today Heinen’s Grocery Store) in downtown. He painted the 13 murals that are below the glass dome and depict the founding of the New World and more specifically that of Cleveland.

Millet also has works in Cleveland’s Old Post Office, U.S. Custom’s House and Federal Court Building on Public Square. Those murals depict the history of the postal service around the world. Cleveland is fortunate to have two sets of his work freely on display for the public to admire.

Francis Millet also served in the Civil War, studied art around the world and was a trustee of the Metropolitan Museum of Art. He was married and had three kids. But it was believed that he was also involved with Major Archibald Butt, who served President Taft in the U.S. Army. They were known to share a residence together and they died together, both on board the Titanic when it sank in 1912.