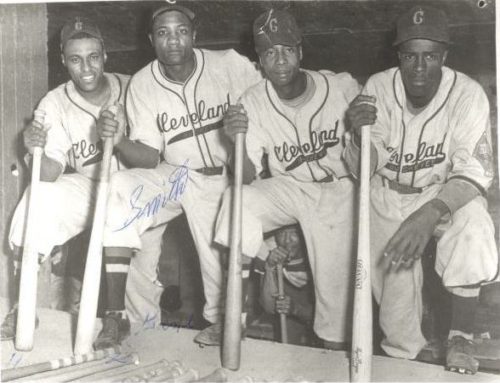 The Cleveland Buckeyes were organized by Ernest Wright and Wilbur Hayes at the end of 1941. Although in 1942 they were the Cleveland-Cincinnati Buckeyes. In 1943 they began solely playing in Cleveland. Some of their most famous players were pitcher Gene Bremmer, first baseman Archie Ware, catcher Quincy Trouppe and centerfielder, Sam Jethroe. Sam was the league’s most valuable player in 1945; he had a .393 batting average and 21 stolen bases.

Many of the teams in the Negro Leagues did not have a lot of money, therefore to get to their away games they had to travel by cars. In September 1942 there was a tragic accident involving one of their cars in which two players were killed and four others seriously injured.

The Cleveland Buckeyes would go on to play in two Negro League World Series, winning in 1945. The team played many of their home games at League Park on the east side.