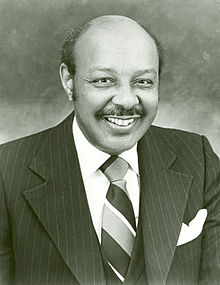 Last February during Black History month, we looked Carl Stokes (former Mayor of Cleveland), this year we look at his brother Louis Stokes. Louis Stokes was born in 1925 and grew up in Cleveland in one of the first federally funded housing projects in the country. Louis served his country in the Army in the early 1940’s. He became a lawyer after attending law school in Cleveland. He argued the Terry v. Ohio case before the United States Supreme Court in 1968.

He would once again serve his country as representing Ohio in the United States House of Representatives from 1969 to 1999. He passed away in 2015.

Today around Cleveland we have the Louis Stokes Wing of the Cleveland Public Library in downtown Cleveland. This was built in 1997 as a ten story addition to the historic Main building. Also the Cleveland VA Hospital in University Circle is named in his honor.