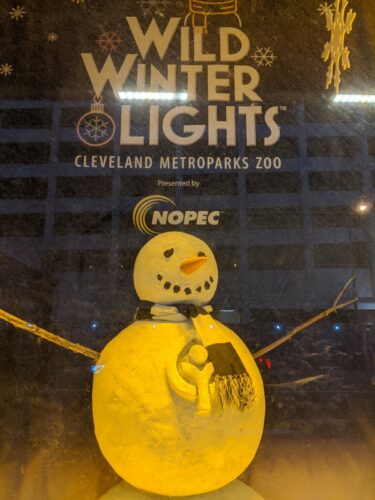 Cleveland was home to one of the largest retail districts in the country in the early 20th century. Six major departments along with many other retail establishments lined Euclid Ave from Public Square to Playhouse Square. At Christmas time they put on quite the performance in their display windows. Planning for the Holiday display windows would begin as early as March and the stores went all out. Higbees was home to 72 windows and they were even featured in the opening of the movie “A Christmas Story”.

Higbees (bought out by Dillards) was the last of the downtown department stores to close on December 31, 2001. Today the old Higbee’s building is the Jack Casino. Each year Jack pays tribute to the buildings history by decorating some of the display windows. The windows are sponsored by various local businesses and groups. This year they include the Cleveland Browns, the Cleveland Cavaliers, Destination Cleveland, Cleveland Play House and the Cleveland Metroparks Zoo to name a few. Take a stroll down memory lane (or Ontario St.) and check them out this holiday season.

Tours of Cleveland, LLC offers exciting and educational walking tours of beautiful and historic downtown Cleveland. Our tours are offered year round and in December, our Downtown Highlights tour is transformed into the Christmas Edition. Learn about some of the unique Christmas traditions from Cleveland’s storied past. See our schedule and book your tour at www.toursofcleveland.com.