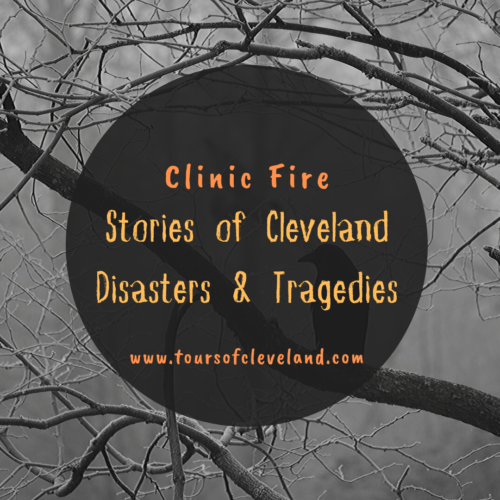 The Cleveland Clinic fire would occur on the morning of May 15, 1929 and claim 123 lives. The Cleveland Clinic is one of the best medical facilities in the world. It started in 1921 with a team of doctors who returned from France after World War I. The clinic was originally located near E. 93rd St and Euclid Ave and was comprised of a four story structure with a 184 bed hospital and research building.

The basement of the building contained the heating pipes, supplies and storage rooms including the ones where the patient X-Rays were housed. In fact it held around 70,000 X-ray sheets! This was a problem because if the sheets caught fire, they would release extremely toxic fumes.

The ultimate cause of the Cleveland Clinic fire was never officially determined, it could have been due to “spontaneous” combustion of the film due to overheating, a careless cigarette butt that was not extinguished or a spark from a rigged extension cord and light bulb. Regardless of the cause, the X-rays did catch fire, toxic gas was released in the ventilation system and several explosions went off in the building. Most of the victims died from exposure to the poisonous gases that filled the building.

This tragedy also brought out heroes of all types. The firefighters were on the scene in minutes, putting on their gas masks and entering the building. Two painters were nearby when they heard the first explosion. They rushed over with their ladders and immediately began helping get people out of the windows, down to safety. Doctors and nurses fought to save their patients. Nurses were heard saying “Save the patients, save the patients” to the firefighters. Dr. John Phillips, one of the founders of the Clinic, escaped the building and stayed on site helping those victims pulled from the fire but would later that evening die from breathing in the poisonous gases.

To learn more about this Cleveland tragedy and others check out “Cleveland’s Greatest Disasters!: 16 Tragic True Tales of Death and Destruction” by John Strak Bellamy II.