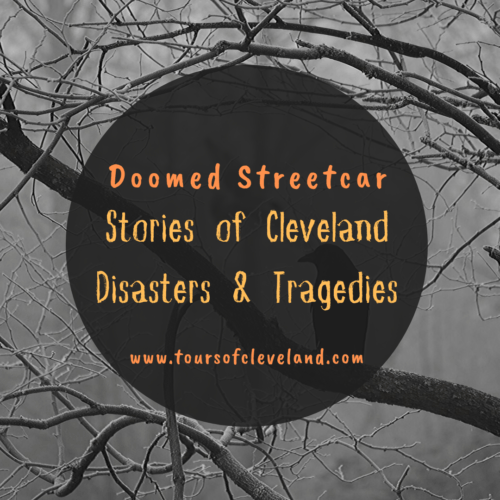 The Central Viaduct bridge opened in December 1888. It was one of several bridges that traversed the Cuyahoga River. It was 101 feet over the river and with a pivoting center span. This span would open when river traffic needed to pass under and was something that Clevelanders were used to.

Safety measures were in place to ensure nothing like this would happen, they included red lights turned on when the bridge was open, safety gates, a derailleur switch that had to be manually pulled by the conductor or motorman after stopping the car prior to reaching the bridge and an electrical cut-off switch that would cut power to the streetcar if the bridge was open, thus preventing if from moving forward.

On the night of November 16, on their second trip of the day, motorman Augustus Rogers and conductor Edward Hoffman left downtown headed to the bridge with 21 people on board. Minutes prior to their arrival at the bridge, a tugboat below signaled for the bridge to open.

It was raining that evening and visibility was poor. Conductor Hoffman pulled the derailleur switch and the car moved forward. They were not aware that the bridge was open and assumed because the train had electricity everything was okay. They crashed through the safety gate and plunged into the river below!

The scene was chaotic and gruesome. Rescuers arrived but their rescue operation quickly turned into a recovery option. Seventeen lives were lost that evening, young and old and from all walks of life in Cleveland. Ultimately, no one was held accountable for the incident. The Central Viaduct would be demolished in 1941 and used as scrap metal for the war effort.

To learn more about this Cleveland tragedy and others check out “Cleveland’s Greatest Disasters!: 16 Tragic True Tales of Death and Destruction” by John Strak Bellamy II.

Tours of Cleveland offers walking tours of downtown Cleveland. See our schedule and book your tour at www.toursofcleveland.com