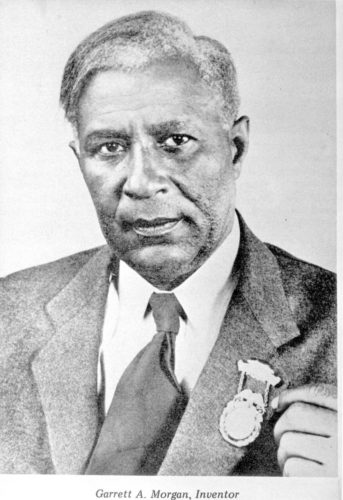 Garrett Morgan (1877 – 1963) was an inventor best known for his prototype of the traffic light. Today we will look at one of his other famous inventions, the safety hood (gas mask). Cleveland gets its drinking water from Lake Erie and in 1916 as construction was happening on one of the cribs that supplies the drinking water to the city, tragedy occurred.

While working in the underground tunnel, workers hit a pocket of natural gas and it exploded killing eleven. The rescuers who entered the tunnel to pull them out were overcome by the gas as well. A local police officer remembered Garrett Morgan and his gas mask, seeing Garrett demo it before. In the early hours of the morning he went to Garrett’s house and asked for his assistance. Using the gas masks, Garrett and several others were able to rescue some of the trapped workers.

Due to the times, all the rescuers were honored by the city for their heroics except Garrett. This was due to his race. Almost a year later he was recognized with a medal and today, the water treatment plant is named after him!