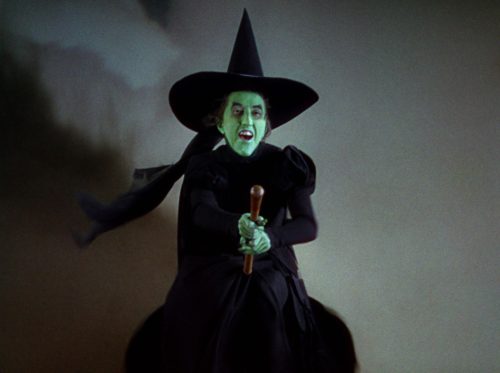 On August 25, 1939 “The Wizard of Oz” was released by MGM. Eighty years later it is still considered one of the most seen films in the world. The picture starred Judy Garland, Ray Bolger, Bert Lahr, Jack Haley and of course Cleveland’s own Margaret Hamilton as the Wicked Witch of the West. In 2003, The Wicked Witch of the West was ranked No. 4 in the American Film Institute’s (AFI) list of the 50 Best Movie Villains of All Time, making her the top ranking female villain.

Margaret Hamilton was born in Cleveland in 1902. She became a school teacher but studied theater at Cleveland Playhouse. She got her big break while in a production of “Another Language” on Broadway in 1932; the play was made into a movie in 1933 where she would continue in her role.

She would be cast as the Wicked Witch but she was not the first choice. Actress Gale Sondergaard originally read for the role in makeup and a glamours gown. She did not want to play the part as an “ugly” witch. Margaret read it wearing “the oldest, crummiest-looking clothes” she could find.

While filming, Hamilton suffered severe burns on her face and right hand. During a scene in Munchkinland, the pyrotechnic effects went haywire and melted her makeup. It took her six weeks to recover from her injuries. Because of the time, she did not want to be labeled a problem actress and did not sue but did return to the set with one condition – no more fireworks. They used a stunt double for the dangerous scenes and ironically she ended up being hospitalized for burns as well.

Later in life she was known as the spokesperson for Maxwell Coffee, Aunt Cora. A gentle woman, with glasses who gave motherly words of wisdom. She died in 1985.

Tours of Cleveland offers exciting and educational walking tours of beautiful and historic downtown Cleveland. Join us on one today! Book at www.toursofcleveland.com.