The Elliot - Tours of Cleveland, LLC
Skip to content 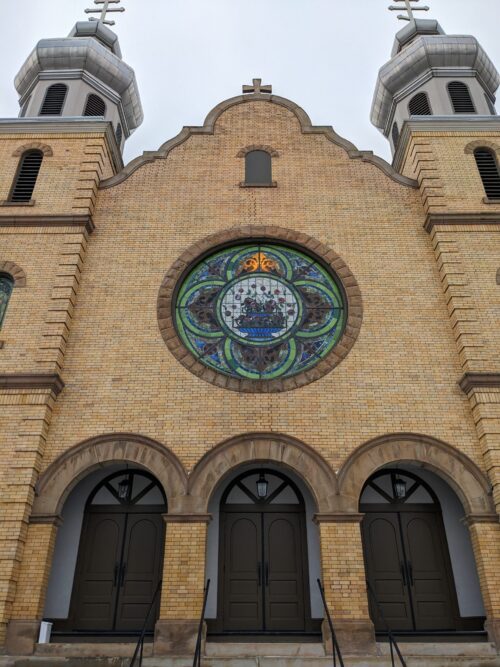 The Elliot, a wedding and event space, was once the Holy Ghost Byzantine Catholic Church. The church received its charter in 1909 and opened its doors in 1910. The building was designed by M.E. Wells and Joseph Duvalusky at a cost of about $15,000. The church served the Rusyn community here in Cleveland. Rusyn, not to be confused with Russian, were folks with their own language and customs from parts of Slovakia, Ukraine, Poland and Romania.

The church grew throughout the years serving 900 families in 1938. But as times and the neighborhood changed the church saw a steep decline in attendance and in 2009 it would officially close. The space would, for a brief period, become a Byzantine Cultural Center but that would close in 2015.

Then came along Stephanie and Tim Ridgely, who purchased the building and began the plans to renovate it into an event space for weddings, receptions and all kinds of events. They did not use any historic tax credits for the renovation, thus they had much more freedom in the choices they could make in the redesign. The only limits they had was to the front of the building, it needed to remain the same.

The biggest challenge was bringing the building up to code. Major work was done with the stairs, the bathrooms, the HVAC and shoring up the foundation and the roof. There had been a lot of water damage throughout the years.

They also wanted the space to be non secular. The stained glass windows were removed, the ceiling painted over and the main floor was given a neutral but bright color palate. The lower level was turned into a great bar space that hosts trivia night and even drag shows.

The center of the large rose window in the back of the sanctuary was replaced, removing the religious art and replacing it with beautiful roses, using some of the glass from the other windows in the church. A 700 pound chandelier was hung as well.

Tours of Cleveland, LLC offers year round, exciting and educational walking tours of beautiful and historic downtown Cleveland. Learn more about our walking tours, see our schedule and book your tour by visiting our home page. www.toursofcleveland.com