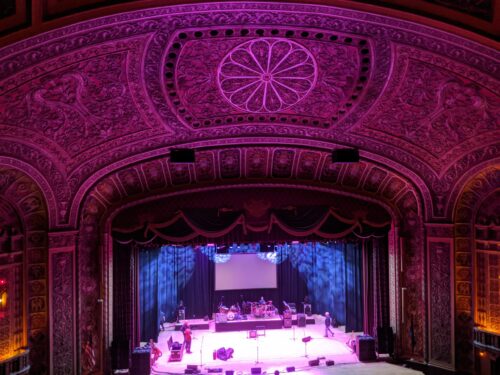 So for those of you who follow me, you know I do venture out of Cleveland occasionally. This weekend my husband and I took a trip to Fort Wayne, Indiana. It was just over a three hour drive, west of Cleveland. We had great time and visited some really cool museums and found several Cleveland connections. Today, I want to focus on the Embassy Theater in Fort Wayne. It has a very similar story to our theaters in Playhouse Square.

The Embassy Theater opened in 1928 about six to seven years after our Playhouse Square theaters opened. It was originally called the Emboyd. And like our Cleveland theaters, it started out as Vaudeville and would transition to the movies. They would be renamed the Embassy in 1952 after a sale. The theater was also home to a Grande Page Pipe Organ. In the early 1960’s the theater hosted Buddy Nolan and his “Theater Organ at Midnight Concerts” which drew big crowds despite their late start.

As time went on and business slowed, there was talk of demolition. In fact, just as the wrecking ball was heading to the Ohio and the State here in Cleveland, so was it to the Embassy. But a group of folks in town led the fight to save the theater, raised money and began work to renovate the theater and make it a show palace again!

We got a chance to tour the theater and the old Indiana hotel which is connected. What a beautiful theater! Today it seats close to 2,500 people and like our Playhouse Square offers a wide variety of entertainment. They even offer a Festival of Trees during Christmas like the Allen.

Tours of Cleveland, LLC offers walking tours of downtown Cleveland. All our tours include a stop inside Playhouse Square. Cleveland is home to the second largest theater district in the United States. To learn more, see our tour schedule and book your walking tour, visit www.toursofcleveland.com.