Spirit of 76 Museum - Tours of Cleveland, LLC
Skip to content 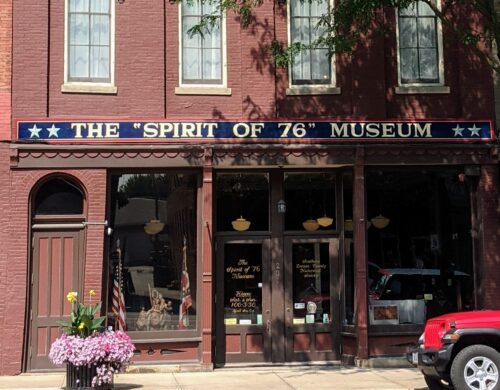 Recently I visited the Spirit of 76 Museum in Wellington, Ohio. I went because on our Downtown Public Art walking tour we talk about the Spirit of 76 painting by Archibald Willard that hangs in Cleveland City Hall and I wanted to learn more. The Museum’s first floor is dedicated to the painting and Willard. The additional floors encompass many aspects of life in southern Lorain County, including farming, military service, industrial tools and clothing.

Archibald Willard was born in Bedford but spent time in Wellington, Cleveland and New York City. In 1875, he was inspired by a parade in Wellington create a painting he called the Spirit of 76. This painting would make it to the Centennial Celebration in Philadelphia in 1876 where it would earn much acclaim.

Willard would go on to paint 29 originals, copies of the painting that he painted by hand, making slight changes to each, so they are unique. Cleveland is home to two – one is inside Cleveland City Hall and the other is at the Western Reserve Historical Society (although I have not visited that one). The original painting is in Marblehead, MA today.

The three people in the painting were inspired by people in Willard’s life. The man on the right, a friend and Civil War veteran, Hugh Moser. The man in the center, his face is that of Willard’s father, a pastor although the body is based off a different man who originally modeled for Willard but ultimately was not used. The boy on the left is the son of General John Deveraux, Henry Deveraux.

The Museum contains many of Willard’s other works throughout his life. He had a job painting scenes on furniture and carriages. The Roman Prisoner is a painting he did while in New York City. I have to say it is one of my favorites. Much of his work had a comical aspect to it and he even painted himself in quite a few of his works.

I recommend checking out the Spirt of 76 Museum. It is small but packed full of history and art. The folks that work there are extremely knowledgeable. To learn more visit their website www.thespiritof76museum.org.

Tours of Cleveland, LLC offers exciting and educational walking tours of beautiful and historic downtown Cleveland. Our guided walking tours are offered year round. To learn more, see our schedule and book your tour, visit our website, www.toursofcleveland.com.