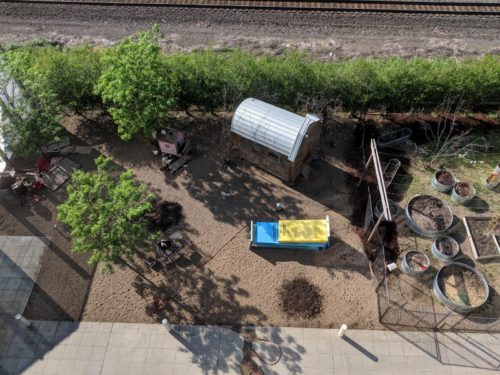 Did you know that in the heart of downtown Cleveland several chickens, pigs and goats all live on their own little farm? Of course back when Cleveland was founded in 1796, this would not be a surprise at all but I’m not talking about then, I’m talking about today. Let’s visit Cleveland’s urban farm!

Just outside the Huntington Convention Center windows and across from the railroads tracks and First Energy Stadium in downtown you will find the urban farm owned by Levy Restaurants. They are the food service providers for the convention center. The farm began with some bees that produced honey but has expanded to include pigs, chickens, goats and plants grown in raised beds.

Tours of Cleveland offers walking tours of downtown Cleveland. We have several different tours to choose from, including a Christmas tour each December. Tours are offered year round! Visit our website to learn more, see our schedule or book your tour. www.toursofcleveland.com.