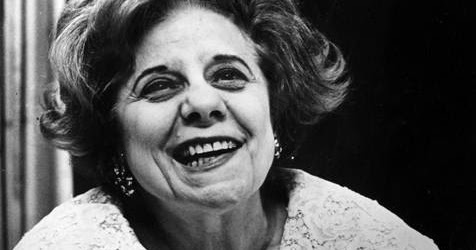 March is Women’s History Month, so throughout the month we will look at women from the Cleveland area. We begin with the “First Lady of TV News”, Dorothy Fuldheim. Dorothy moved to Cleveland in the 1920s working as a lecturer, moving into radio and eventually into television where she joined WEWS, Cleveland’s first TV station, in 1947. She is the first woman in the United States to anchor a television news broadcast as well to host her own television show.

In her lifetime she interviewed many people, including Mussolini and Hitler (prior to the start of WWII), Helen Keller, Martin Luther King, Jr. and the Duke of Windsor. She was no stranger to speaking her mind. During an interview with activist Jerry Rubin, she became so upset with his behavior, she threw him off the set while on the air.

Dorothy Fuldheim worked at WEWS all the way up until she was 91, when she suffered a stoke in 1984. The TV station was so overwhelmed with phone calls asking about her condition, they had to set up an automated answering machine to provide updates about her health. She passed away in 1989.