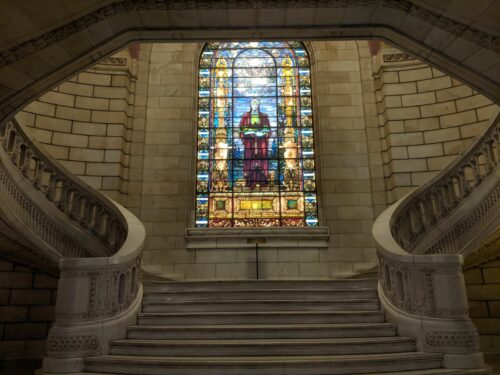 The Cuyahoga County Courthouse on Lakeside Ave opened in 1912. It was the fifth home of the courthouse which moved throughout the years around Public Square. It was part of the Group Plan of 1903. The buildings architects would be Lehman and Schmitt who would create the Beaux Arts structure modeled after the Hotel de Cite of Nancy, France.

Charles F. Schweinfurth was the architect who would design much of the interior space. Working with Frederick Wilson, they would design the beautiful stained glass in the main stair case. The structure would cost about five million dollars, with the purchase of the land costing around one million dollars.

The Artwork of the Courthouse

The Cuyahoga County Courthouse is full of murals and paintings that were specially commissioned to illustrate aspects of the law and its progress including “King John Signing the Magna Charta at Runymede,” by Sir Frank Brangwyn.

The outside of the building is decorated with statues of those men who helped develop the law in all of its “human manifestations.” Statues include Thomas Jefferson, Moses, Stephen Langton and Gregory the IX to name a few.

Today the building houses only judicial functions (Court of Appeals, Probate Court, Domestic Relations) as other activities of County government are currently housed in the Administration Building at the corner.

Tours of Cleveland, LLC offers walking tours of downtown Cleveland. Our tours are offered year round. Our Downtown Highlights walking tour hits all of the highlights in one great, two hour tour. See our schedule and book at www.toursofcleveland.com.