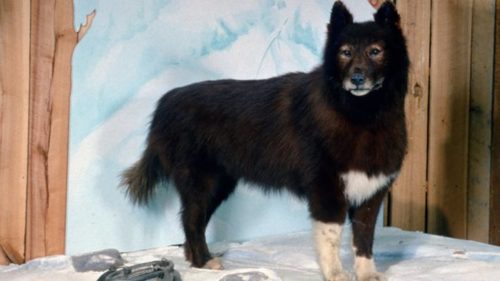 Original March 2019/Updated March 2021 – This past weekend (2019) the Cleveland Museum of Natural History celebrated Balto’s 100 year birthday. Not familiar with Balto? Well… In January, 1925 there was an outbreak of diphtheria that hit the children of Nome, Alaska. The only serum that could save their lives was in Anchorage and the only way to get it there was by a team of sled dogs.

It was Balto, a Serbian Husky who, along with his handler, Gunnar Kaasen, led a team of dogs on the final leg of the journey to get the serum to Nome. Balto and Kassen became heroes after their daring feat. A statue of him was even erected in Central Park to honor him.

But things took a turn for the worse for Balto years after his historic run, when he was sold and placed in chains, in a small pin at a novelty museum in Los Angeles. Cleveland businessman, George Kimble, discovered him and his companions living in these unhealthy conditions and worked with The Plain Dealer to bring him and his team (Billie, Tillie, Sye, Alaska Slim, Old Moctoc and Fox) to Cleveland.

In 1927, they arrived to a hero’s welcome with a parade downtown up to City Hall. They would live at the Brookside Zoo (now the Cleveland Metroparks Zoo). When Balto passed away in 1933, his body was stuffed and donated to the Cleveland Museum of Natural History, where he remains on display today!

March 31, 2021 is Balto’s Day of Giving at the Cleveland Museum of Natural History. The museum invites you to make a gift in support of the it’s wildlife enrichment efforts. Their goal is $30,000.

Tours of Cleveland, LLC offers exciting and educational walking tours of beautiful and historic downtown Cleveland. Come and explore the city with us all year long. Learn more, see our tour schedule and book your walking tour at www.toursofcleveland.com.